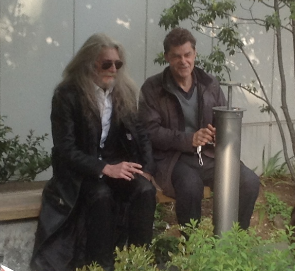 I guess it may seem strange to some Chopin readers to find an article about Björn Andrésen (see note #1) in a music magazine. Björn continues to be famous in Japan for his role of the adolescent Tadzio in the film Death in Venice – a fame worldwide and completely against his will. His musical activities on the other hand, are hardly known at all. Thus, I apprehend the opportunity to fulfill a former promise given to the late Ms Naito Ai (Superintendent of the onetime magazine Hanna, Ltd.) by writing an article about Björn for Chopin. Björn Andrésen has give his personal consent to the publication of this report and Chopin has expressly offered these pages for the purpose.

Director Luchino Visconti’s Death in Venice (2) is a cinematographic masterpiece in which the lovely melody of the Adagietto from the 4th movement of Mahler’s Fifth Symphony is most beautifully interwoven with the imagery and whose place in film history is enshrined. Once the film had been released in 1971, Japan experienced a Mahler boom; particularly the Adagietto was not only appreciated by music enthusiasts but also became popular with the common crowd as background music.

Visconti’s Death in Venice is the film version of the eponymous narration by Thomas Mann – one of the three films called his German Trilogy (3). It is all about the aging German musician Aschenbach, who has come to Venice for recovery, and his encounter during his stay at the Lido with young Tadzio, a descendant of Polish nobility. Fascinated by his perfect beauty, (in the German original vollkommene Schönheit) he follows Tadzio wherever he shows up and meanders through the labirinthian lanes of Venice. In the final scene, cholera consumed Aschenbach beholds Tadzio’s shape from afar, walking slowly in the glistening light toward the sea and – already at death’s door – gazes after him mesmerized.

At a first glance the plot of this film may appear somewhat monotonous but in one of the scenes Aschenbach remembers a conversation with his friend Alfred about music theory. In this scene, Alfred contradicts Aschenbach’s notion that man is able to create beauty through reason and relentless effort. This conviction to which Aschenbach adheres, is shattered in its foundations through Tadzio’s appearance, his perfect beauty that was not created by human effort. It is this ironically cruel, at times caricatural humor that is inherent in the film.

Death in Venice was first shown at the 24th Cannes Film Festival, turned out to be a grand box office hit and can still be seen – decades after the opening night – at movie theaters.

Björn’s Life As A Musician

At the time when he was selected among several thousand applicants for Tadzio’s role, Björn was registered at the Adolf Fredrik School of Music in Stockholm where he studied piano and guitar and loved Bach’s music. The international success of the film, however, was turning more and more into a psychic strain for the fifteen-year-old boy. He had matched the role chosen for him by Visconti perfectly and had instinctively “interpreted” the gorgeous Tadzio with high accuracy. (4) But later in his life he would be identified with Tadzio wherever he went and fell – as he puts it – into a depression.

There is an episode from this period which he keeps retelling even now. After having played a piece by Liszt at a party on the piano, a young woman in a skintight dress came up to him all excited and cried “So you can really play the piano!” It may easily be guessed that this actually inoffensive incident was hurtful for Björn, who had attended a music school and had been trained to be a musician.

It has been 19 years now since I first met Björn in Stockholm. What he told me back then I have not published yet, according to his wishes. “I’ve been through with this film for a long time and I don’t want to deal with it any more in the future”, is what he said and so I understood that Tadzio’s shadow is still hovering over him and that it was advisable not to touch these issues any more. After that I had two more opportunities to meet Björn and in every conversation we had, I felt his profound humaneness.

At our meeting in 2002 I had the impression that Björn was feeling – contrary to before – fine and it was evident that he was leading a fulfilled life. And indeed, shortly thereafter Björn’s name started to show up, particularly in the European media – after his persistent refusal to talk about himself. I was delighted to see that he could finally accept his own life.

In 2016 I met Björn at the age of 61 after fourteen years again in Vienna. When I met him at the airport, I was surprised to see how much his appearance had changed – his character however was the same. He told me that he was then working on a documentary. It is hardly known that Björn has a strong liking for Japan and he may well visit Japan again one of these years. (5)

In real life Björn is a person difficult to grasp. If one wanted to describe him, images like “passing cloud”, windy breeze”, “gentle Viking” come to mind. But an outsider like myself will hardly ever grasp his idiosyncracy. I would just like to tell the following episode, hoping to shed a bit of light on Björn Andrésen: When he taught at a music school in Stockholm, his students presented him with a bunch of flowers at the end of the school year and expressed their gratitude saying, “This class was the most demanding one but you were our best teacher.” Björn was moved to tears. “These kids didn’t know a thing about the film. They had shown me quite independently of it their appreciation of my personal self.”

Björn Andrésen (b. 1955) I use the usual spelling of the Swedish name in Katakana.

The Damned (The Twilight of Gods), Death in Venice, Ludwig.

Björn comments: “I was a child and without comprehending anything I did what I was told to do.”

After the release of Death in Venice, Björn visited Japan twice. He said that wherever he showed up, he was beleaguered by reporters or female fans. 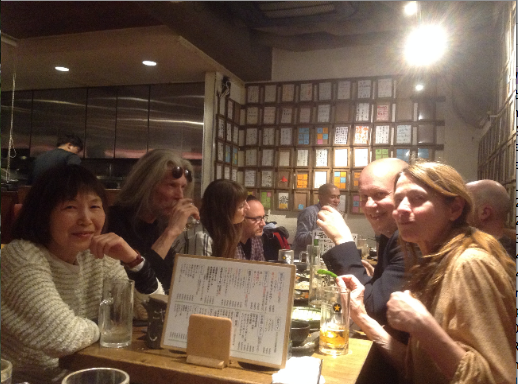